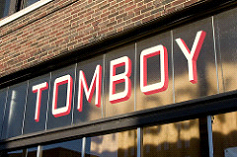 {Hello to all my readers.  This post was written by a very talented fellow blogger, Natalie.  I know that I have readers out there that will really enjoy this very insightful post.  Happy reading :)}

It sounds simple: there are boys and there are girls, and everyone should be treated equally. Telling women they should have children instead of work? Sexist. Telling men they shouldn’t show emotion or cry – ever? Also sexist. And pressuring girls to wear pink and boys to wear blue? See previous statements.

No one wants to admit that they might be sexist, but maybe we, as a society, need to talk about. I confess – I’m a recovering sexist.

If I had to summarize my personality in one word, I’d choose “tomboy.” In high school, I played competitive tennis. In college, I bought a motorcycle. No one taught me how to apply make-up, and pink, sparkly clothes aren’t my thing. That was my style, and everyone told me that was A-Okay.

And it was. What they forgot to mention, though, was that being a tomboy didn’t make me better than other girls.

Growing up, I categorized women into two groups: the delicate, feminine Sleeping Beauty and the no-holds-barred Fast and Furious Letty. Cool girls could handle any situation – car chases, gunfights, kicking bad guy butt – while the girly ones couldn’t deal with a hangnail (or the prick of a spinning wheel). In comparing the two to each other and also to myself, I couldn’t figure out why any girl would allow herself to fall into that ultra-feminine category. Sitting around all day, playing with hairdos and make-up, waiting for some prince? Lame. I’d rather play tennis instead, and do something with my life.

I looked down on girly-girls for years, thinking them weak and shallow and useless. I held my nose high because I “did” things with my life: I played sports, earned good grades, aspired to write, played video games, worked out… Girly-girls, too busy avoiding hangnails, couldn’t understand.

And then I learned ballroom dance.

Ballroom dance’s inherent male lead initially fit that old-fashioned gender role I despised, but as my steps became more confident, I noticed a blending of these two types of women: each new move required precision, technique, and a whole lot of practice — all very reminiscent of my days as an athlete.

But wait, hang on. Sleeping Beauty’s tiny cut immobilized her; how could girly girls handle muscle aches or foot pain after a grueling practice session? Stubbornness and a little elbow grease were Letty’s department. I was confused. My extreme presumptions about female dancers’ femininity didn’t reconcile with reality.

For the first time, I saw a shade of gray between girly-girls and tomboys.

This wasn’t something I learned in school. No one told me I had developed some sort of superiority complex; having a masculine personality didn’t make me better than girls with super-feminine interests, just as a man isn’t intrinsically worth more than a woman. I was blinded by my personal sexism. My new awareness of the shades of gray between these two opposing images of women revolutionized how I saw other girls — and myself.

Imagining an alternate universe where I refused to dance conjures up the image of a girl applying stereotypes to herself: you’re either girly or a tomboy, with no in-between.

Thank goodness our world isn’t as rigid and simplistic as the one I imposed on myself.