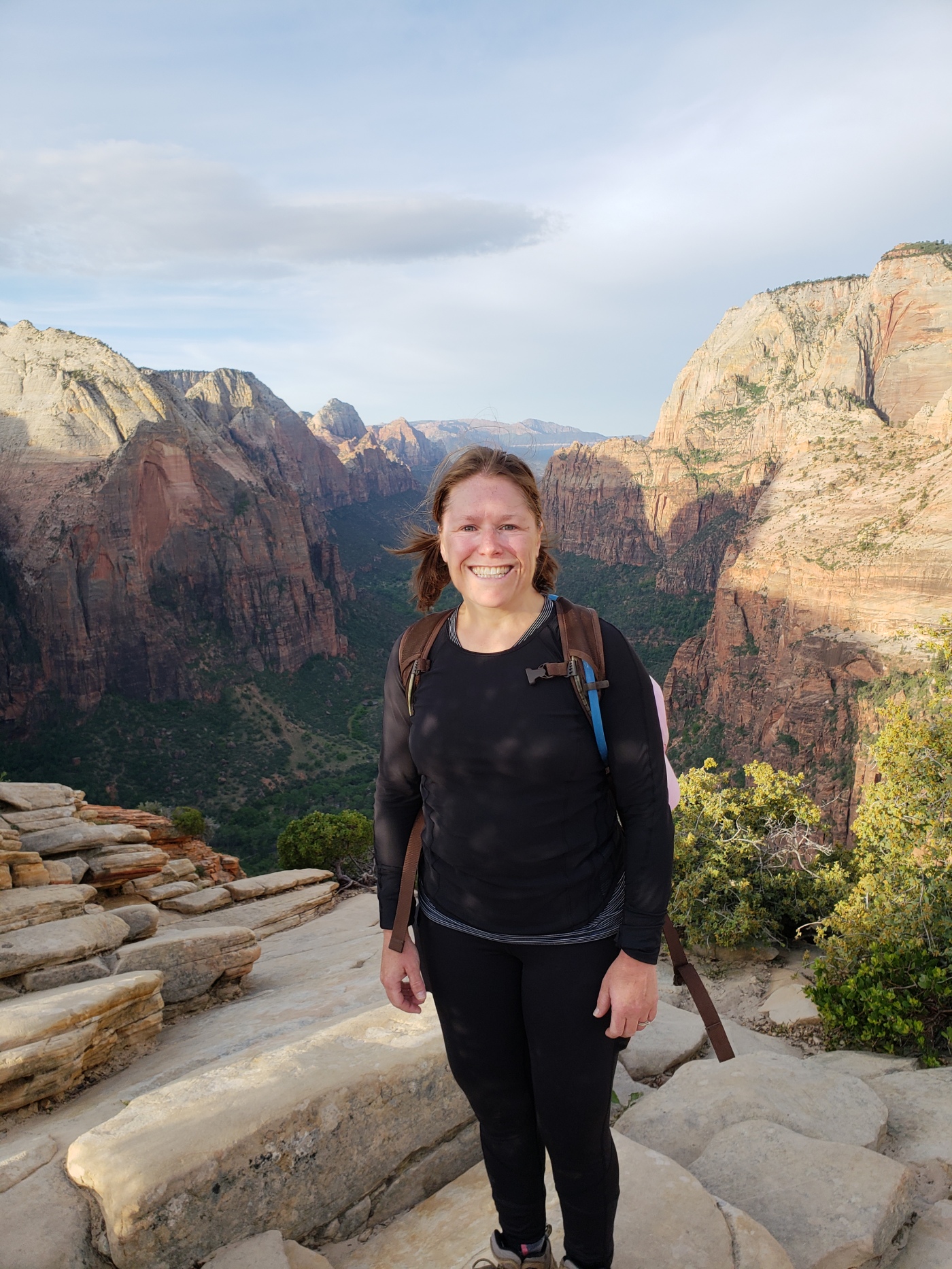 Angels Landing, a plateau at the peak of a red rock face, perched in the heart of Zion National Park.

2.5 miles of strenuous hiking up multiple series of switchbacks, including Walter’s Wiggles, takes you to the landing point where some will stay while others scramble to the final landing. Two long series of chains bolted into the rock with steel poles provide a safety net from the 1000 foot drop offs. 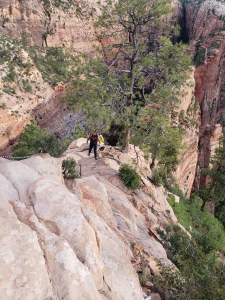 My first attempt at reaching the summit of Angel’s Landing, I had taken the first shuttle of the day from the town beside Zion park. I darted across the park entrance to catch the next shuttle up the canyon. I disembarked at the Grotto stop, along with dozens of other eager hikers. The herd quickly thinned as the climbing grew strenuous. At the top, many other hikers already milled about. The first series of chains wasn’t nearly as challenging as I thought it would be. I stood on the flat section before the second series, looking up at a daunting rocky climb. I wanted to do it. But, all I could think about was the growing number of people, of various hiking abilities, streaming both up and down sections only wide enough for one. The communication was minimal. The chaos was growing. I didn’t feel this was something I should do. Or that I wanted to do under these conditions.

Three days later, with an upgraded plan, I got up before the sun had risen. Sandwich in hand, I walked the mile to the park, bypassing the later town shuttle. I made the first shuttle up the canyon at 6 am. It was full. Again, most people got off at the Grotto. But, this time there would only be a few people at the top, if any. I was extremely motivated.

The switchbacks began. The herd thinned. I was going full steam ahead. I chatted briefly with a couple of girls holding a reasonable pace. They stopped just as a young man looking like a mountain goat slid by. I latched onto his smooth stride and chatted him up for a few minutes until I encouraged him to go on if I was slowing him down. The next hiker I encountered was decked out in traditional gear, denim, cowboy hat, even a bandanna. A photographer at heart, the only reason he didn’t leave me in the dust was his inability to pass up perfect lighting. I didn’t let up. I kept pushing. No stopping. I wanted this. I wanted it bad. I ignored the stitch pulsing in the side of my stomach.

After a particularly steep section, I was passed by a gazelle disguised as a man, running up the steep incline. Goat boy and gazelle ahead, cowboy photographer close by, that made three. How many others were hardcore enough to be up there already, I wondered.

Easing up on a flat section to settle the cramp in my side, I didn’t stop once. Soon I was at Walter’s Wriggles. I put my foot down a little heavier on the pedal and counted down the turns. It felt really good to get to the first landing and see no one on the chains.

The first section was a breeze. I’d already done this, and this time there wasn’t any waiting. The second section was soon upon me. I didn’t think, I just went. I was soon climbing, placing my hands and feet strategically into the worn divets in the rock. I felt like a four legged spider. The climbing was strenuous. I only used the chains when I really needed to. It felt safer to simply scramble over the natural rock than grab onto a man made device.

There was one short bit where the drop offs were on both sides. I knew from experience not to look down. Right before the very last stretch, I stopped and looked up. The final stretch looked steep. It went way up. Just up. I thought, do I really need to do it? Am I not satisfied? The thought vanished. I told myself to do it. I came all this way. I would always wonder. It was short and I’d already done the hard work. Alas, after one last stretch of hard work, I made it to the long plateau. I was perched on Angel’s landing high in the sky with less than half a dozen others. I realized how hard I had climbed. I was completely elated to have made it.

I did take a few moments. I did take it all in. I also chose to start the descent before it got too busy. I was glad I did because there were stretches between groups climbing up that allowed me to take my time and descend calmly and safely.

On the first landing, all chains descended, I took a real break. I hadn’t stopped from getting up.to making it to the top. I realized how hard I had pushed. That feeling that comes after pushing the performance zone for an extended time flushed through my body. That beat up, weak feeling. I knew I had done all I could and it had turned out.

When I really want something I make happen. All the training had paid off. All the work on stretching my limits had kicked in.

I was full of gratitude for my ability to train so hard through the winter. All those trips to the gym. All those flights up the stair climber. All those weights I lifted. I was grateful for my inner drive, that ball of motivation that burns like a fire, that I harnessed to get up before sunrise and kept tendered and fierce all the way up that climb.

Setting goals, breaking them into pieces, and committing to and doing the work – it’s all doable – and it’s all worth. What would YOU like to take on? How can you break it down? How can you schedule it, commit to it, and DO it?

One thought on “Climb Like a Spider to Angel’s Landing”