We left Friday Harbour on a ferry and headed to Orcas Island.  We didn’t have confirmation of a place to stay that night.  We had contacted one of the few places that may have some vacancy, so we took a chance.  When we arrived, we drove the peaceful, quiet road, easily sinking into the slow pace of everything and everyone around us.  We found the one small ‘main town’ and a lovely breakfast.  How delightful!! The food was tremendous, the view was spectacular, and who knew what the day held?  After our adventures in escaping from the blazing fires in Oregon (Burning Eyes of Fire) we were definitely ready to turn over a new page on our road trip!

During our leisurely break of the fast, we received confirmation that there was indeed room for us.  Yay!!  We relaxed into the new reality that we could completely enjoy the day without worry of where we would end up this evening.  We drove over to the place to see when we could check in.  The Island being small, nothing was a long drive.  The place was absolutely lovely!!  All of the accommodations were individual cabins (West Beach Resort).  Some lined the shore which opened up to a spectacular view.  Others were tucked cozily into the lush, tall trees.  The main building hosted a cafe which also turned into a bar during happy hour.  An old, creaky pier stretched out into the water which was lapping away at the long stills, providing a steady, peaceful lulling splash.  We walked the length, slowly, breathing deeply and taking in the fresh air.  We were too early to check in, so James said to me, ‘Well why don’t we go bike up that mountain you wanted to do?’.  So we found some change rooms, geared up, and off we went.

I chose Orcas Island because most of it was covered by two parks.  One of them was a fairly large, protected and maintained natural area.  There was a road that led to the top of Mount Constitution.  I did just enough research to determine that the road was paved, and that it could be summited by bicycle.  That’s all I needed to know.  If I had learned anything by now, it was that if a summit was reachable one pedal stroke at a time, then it was worth doing.  I used to be the girl that hid from physical challenges.  Now I found myself seeking them out.  I used to question ‘can I do this?’.  Now I found myself questioning ‘is it hard enough?’  Of course, being the fearless, free spirit that he is, my husband instantly agreed to go to Orcas Island.  He also didn’t hesitate to bike up this mountain of mine.

I had only really roughly investigated the route.  I knew it wasn’t a long ride, and I thought that there was about 800 metres of climbing round trip from the main town.  I knew nothing about the gradients.  The cabins where we started from weren’t that far from the town, so, I threw out my estimate and off we went.

Knowing the distance you will be cycling and how much climbing you will be doing can be really helpful.  This information can be used to pace yourself and avoid using up too much energy too soon.  There have been many mountains in my life that I have climbed without knowing anything.  Thus I question whether or not it is better to know, or better not to know, what is ahead of you.  I guess this may be why I was rather unconcerned about knowing the specifics on this particular day.

As soon as we rolled out of the little cove where the cabins were nestled, we faced our first wall.  The hills were steep and unrelenting right out of the gate.  Jeepers.  Well, at least it didn’t take long to warm up.  I didn’t think these gradients would last once we got to the mountain.  Things really eased up as we neared the main town, and rolled on past.

Part way to the mountain, we found ourselves cycling with another couple.  They were really friendly and quickly started chatting with us.  It didn’t take long for the other guy and James to take off, probably egging each other on.  I soon found myself between the new friend I had made, and the two guys ahead.  What I was unaware of was that James and his new cycling companion were hammering it out pretty hard!

It didn’t take long before we were at the base of the mountain.  As we began the weaving ascent, we found ourselves on a lovely road, lined with trees, and reminiscent of the European switchbacks we had fallen in love with.  Very quickly into the climb, this mountain took on a different characteristic.  Smooth switchbacks broken up by the perfect curve providing the cyclist with a plateau of relief before making the turn to the next steep challenge gave way to unrelenting and constant hefty gradients.  The steepness stared us in the eyes and refused to stop.  We worked, we sweated, we grunted, we continued to grind out each pedal stroke.  This mountain of mine had turned out to be quite the beast. 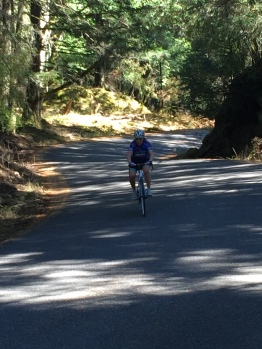 When it seemed like we had been climbing forever, and I was thinking that it simply had to come to an end soon, I saw James pulled over to the side in one of the very few flatter, shadier spots.  I pulled over and asked him what was happening.  He glared at me and declared that he was stopping!  Of course, I knew that his ‘stopping’ was simply a break before he took on the rest of this beast before us.  I decided to join him for a much needed rest and regroup.  After a few minutes, I asked him if he wanted to continue, even though I already knew the answer.  ‘Well’, he declared with a bit of a growl, ‘we are already here.’.  I have never seen him choose to give up on anything.

He is the one that got me into climbing mountains, one pedal stroke at a time.  I told him I was going to continue, and with the next pedal stroke I declared for myself that I would not give in.  I would face this mountain that I chose, just as I had faced all the other mountains that had come into my life.

Despite the unrelenting brutal steepness, and the energy depletion that James was experiencing due to his earlier hammer-fest, we did what we needed to do.  We made it to the summit.  And what a summit it was!!! The view was amazing.  The feeling of accomplishment was overwhelming.  We met up again with our cycling friends from earlier, and basked in the sunshine. 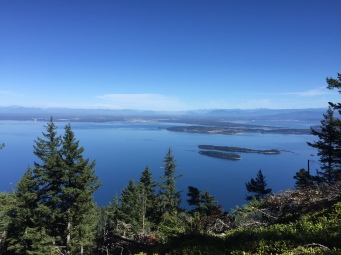 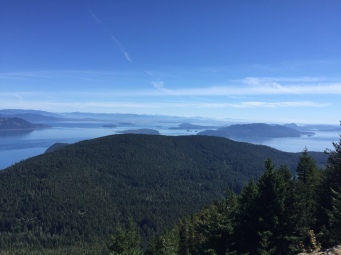 After a nice long break, we finally decided that we should get back to our cabin.  The descent was fast.  The ride back was fairly reasonable, until we hit that last stretch into the little cove of cabins where we would end our cycling journey for the day.  The steepness took over again, and I had to dig a little deeper as my body was depleted.  But simply thinking about my choice of attitude and outlook to continue to climb every part of the mountain without a second thought, I simply went forth.

Next thing I knew, we were rolling into home for the evening.  Fantastic!!  The end of a ride provides a sense of relief when I find myself really spent.  The feeling is a mix of accomplishment, excitement, and joy which quickly turns to calm and peace that overtakes every part of my being.

Our efforts were more than rewarded as we made a visit to the one craft brewery on the island (Island Hoppin Brewery).  We enjoyed some real quality brew, quickly made friends, and were there just in time to see the head brewer bringing home gigantic bags of fresh hops.  The atmosphere was electric.  It was easy to completely let go of all thoughts and sink into the moment.

Whatever it is that you want to take on, you CAN do it, one step at a time!!!